Climate journalist and host of the ClimateGenn podcast.

On Tuesday 24th May the Wines of Alentejo Sustainability Programme (WASP) accompanied by 8 wine producers, came to London to present both the work they have been doing in establishing a rigorous sustainability certification scheme and the certified wines that they are entering into the market.

In the interest of disclosure, I must make it clear that I have been working with the WASP team since last summer as an external observer and communicator in order to document what I learned from a road trip across the region and conducting a series of interviews. 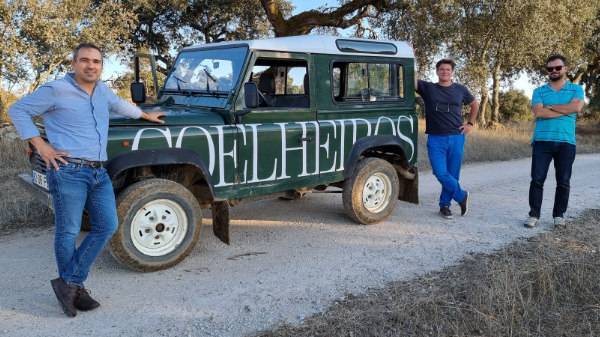 The WASP team has left me alone to produce my own 9 part podcast series that features interviews and observations collected during the project that I will publish in June 2022. I have also written a piece for Harper’s Drinks Magazine supplement that draws directly on that material.

For this article though I am really just sharing my thoughts and observations on the theme of sustainability from the London event.

Register to be notified about the series 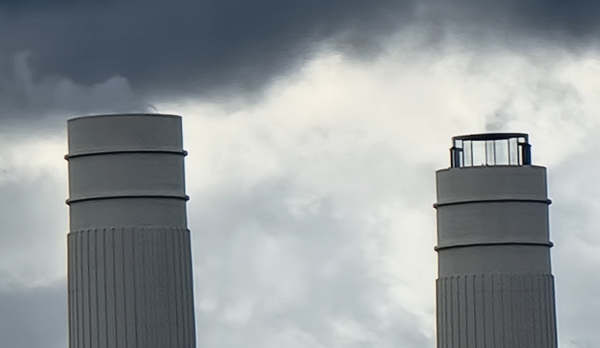 There is so much discussion around climate and sustainability now that it can feel like a deluge of words that don’t always equate to anything close in terms of action being taken to resolve the climate emergency (and it really is an emergency!).

I interview climate scientists on a frequent basis and produce a parallel podcast series of these discussions. One thing to remember, that has been repeated to me over and again in the last few years, is that climate impacts are arriving faster than forecast. It turns out the Earth’s sensitivity to greenhouse gases is much more than previously thought.

This sensitivity can be witnessed in the type of extreme weather impacts we are seeing more of like droughts or floods. We are currently about 1.1ºC above the global mean temperature since the beginning of the industrial revolution.

During UN’s COP21 in Paris, it was agreed that heating above 2ºC was too dangerous for humanity and vital tipping points, or thresholds, would be crossed pushing global climate into a new heating phase. Scientists have since highlighted that this figure is too high and we now must do all that we can to rapidly reduce emissions and stay beneath 1.5ºC global mean average temperature rise.

In an interview this week with the Deputy Director of the Tyndall Centre for Climate Change Research in Manchester, Professor Kevin Anderson, he said that we are emitting around 40 billions tonnes of CO2 into the atmosphere every year and this is likely to rise over the next couple of years.

The IPCC (a group of climate scientists informing the UN process) has created carbon budgets that identify how much CO2 can be released before we cross the vital threshold. At the current rate of emissions, we will use up the whole carbon budget within 10 years. We are literally burning 0.9% of the global carbon budget every month!

If we reduce our emissions to zero within that time then we have a 50% chance of holding to 1.5ºC. These are terrible odds but every 0.1ºC rise in temperature from where we are now, really matters. We are starting to talk about completely different planetary climates that we are moving to, that civilisation is going to be forced to adapt to and quite likely will lead to chaos.

Alentejo is a climate-vulnerable region

Alentejo has long been identified as a climate-vulnerable region for viticulture, most notably in a scientific paper published in 2005 by Dr Gregory V Jones et al. Today we realise that pretty much all regions are vulnerable to certain degrees and it is no longer about the future. Impacts are here. 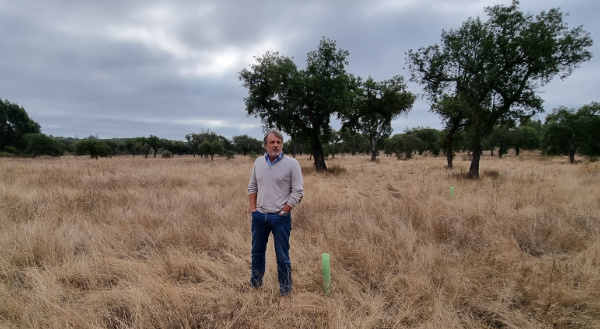 Iain Richardson at Mouchão, his historic family estate in Alentejo

During my visit, one thing that was very clear is that everyone I met acknowledged their vulnerability and was totally focused in responding to the emerging challenges. An easy way to think of it is that these estates of fertile cork oak forests, vines, nut trees, olive groves, and more, are literally our last line of defence as the Sahara desert sweeps northward into Europe. With it come the long consecutive days of rising temperature and drought conditions. Rainfall becomes more erratic and intense (with every 1ºC of warming, atmospheric moisture increases by 7%, driving the extreme nature of downpours and destructive storms).

As part of my podcast series, I interviewed both Dr Greg Jones and Professor Kimberly Nicholas. Nicholas has been doing work on looking at regenerative farming and defines it as “working with nature”, as opposed to working against nature, something we have become very good at.

In Alentejo I saw incredible regenerative efforts on some wine estates and others starting to implement similar techniques. Witnessing this firsthand was encouraging. Thriving ecosystems in an area where I was expecting to see desertification.

At the estates of Herdade do Coelheiros, Grous, Casa Clara, Mouchão, Adega Mayor, and others, I saw living systems being nurtured by humans who are very aware of the challenges that are building against them, pushing back against the climate stress that was already occurring. It felt a lot like human intelligence finally forging a partnership with wisdom and concluding there is a hopeful future.

Of course, every living system has thresholds, which when crossed cannot survive but if these early adaptation efforts become established, then perhaps they can be built up, layer by layer so that the Sahara remains stopped in its tracks?

The WASP programme was initially set up to mitigate climate impacts, providing knowledge and resources to meet the challenges I have mentioned. The certification side of it came later. 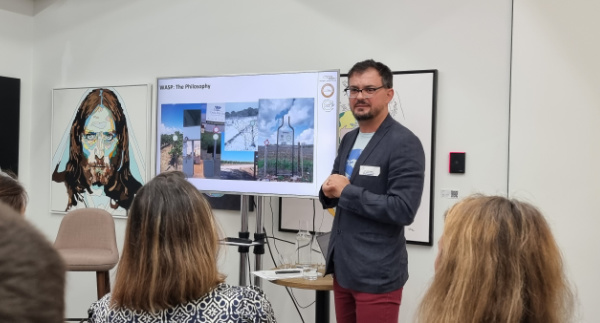 With everyone I spoke to, one feature of the programme became increasingly clear. If you want to accelerate the rate of change then you need to think differently. The WASP manager, João Barosso, had picked up this knowledge-sharing ethos outside of the wine industry and decided that it needed to be deployed among winemakers.

In the last century, the ethic of competition and advantage over other people in the industry led the way. In the era of extreme climate change, 20th-century thinking is no longer applicable and must be replaced by a new era of cooperation.

By working together and building knowledge-sharing networks, the rate of advancement is speeding up. Many wineries in Alentejo are attending workshops hosted by the WASP team and other experts. When one producer finds something that works he contacts the others. Likewise, if something turns out to be a bad idea, why not share it so others can leapfrog the bad experience?

This is an emerging zeitgeist that is today impacting human systems around the world in multiple aspects of our lives and industries, creating a much-needed agile approach.

Notes from the London event

The event in London was different to a lot of tastings in that it was by definition a conscious means to extend the knowledge-sharing network. The wines were there to be tasted and the certified producers all gave a brief presentation and were free to engage with throughout the evening.

The UK is a vibrant and informed consumer market and so it was great to see how inquisitive and engaged people were with a range of related issues. I am just sharing some observations and thoughts. 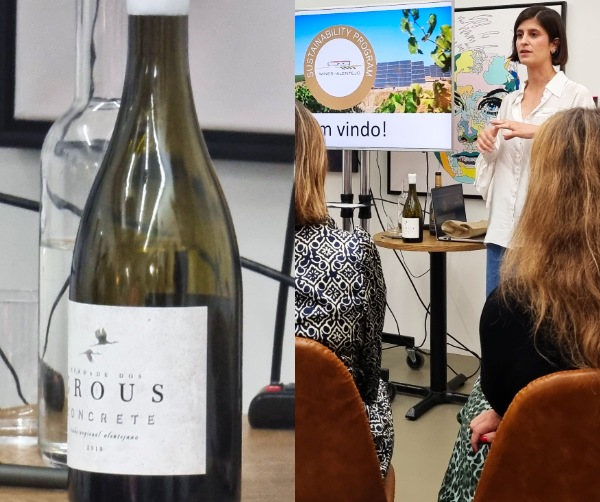 One question that came up during the presentations was the amount of trust that consumers have in back label certifications. The example given was from the Seaspiracy movie where tins of tuna were labeled as sustainable despite the evidence that trawlers catching these fish were actually destroying ocean ecosystems. Consumers are immediately given the signal that back label information is potentially greenwashing.

This was an important question. The trust issue was one that came up early in my speaking with the WASP team. The answer we concluded a while back, and that I think still holds, is that the evidenced stories of the achievements of producers working sustainably must find their way into the public consciousness.

It is, without doubt, the job of communicators and influencers of all types, whether on social media, writing in magazines, speaking on podcasts, or at the point of sale, to be able to articulate the story of true-sustainability and be a voice for the claims being made. In most cases, those with rigorous practices will be keen to tell those stories but they need to find ears ready to listen.

It is worth noting that the question was asked after João Barroso had emphasised that if any claim made by a producer that fits within the sustainability framework is made, then evidence to support it must be available.

The question itself, posed to João, was immediately and rightfully bounced back to the audience. President of the Alentejo Wine Commission, Francisco Mateus, also pointed out that building trust and communicating each’s regional sustainable values is a global problem that everyone needs to address.

As I said before, I believe this is the next phase of extending the knowledge-sharing network!

Surely the wine world is not a big enough problem to worry about?

Another point raised during the dinner by someone at our table was that the wine world is comparatively tiny compared to many other industries. At less than 3% of global agriculture, it is definitely small-scale in terms of carbon emissions. 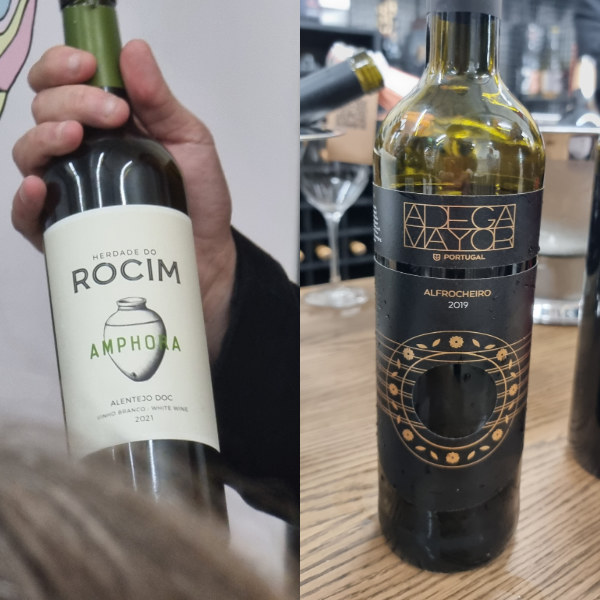 That said, the climate emergency as outlined earlier in this post is one that is the responsibility of all of us high-emitters to address. We have to decarbonise the whole of our society, starting with the wealthier nations that can afford to make the cuts. The wealthiest 10% of the global population are consuming 50% of the carbon budget and the poorest 50% of the population, less than 10%.

It can also be argued that wine is a luxury product that is widely used by the highest emitters. The more that can be done to implement and communicate emissions reduction in the drinks business, the more (hopefully) likely it is that consumers of these products will take note.

Even if the wealthiest high emitters do not take note, the impact on viticulture from extreme climate changes means that the industry is going to become unstable and in many cases unviable. This is a tragedy for wine lovers everywhere.

On the last point of the risks posed to viticulture, it is worth noting that with the climate change that is now unavoidable, we are going to experience greater pressure on all agricultural systems, especially in highly vulnerable regions.

Regenerative agriculture stimulates and encourages soil biodiversity and also creates a blanket resilience in the areas that are succeeding. This overlap or convergence between mitigation and adaptation is itself an accelerator for bringing more wine producers and consumers on board.

In a stressed world, making changes that counter that stress is pragmatic and eye-catching. We all want to be here in 10 or 20 years’ time drinking great wines but whether or not we are depends a great deal on the changes that we make now.

By looking at all areas of our life through the climate lens, the colossal issue of appropriate action starts to recede. It does not go away but there is a kernel of hope. For many climate scientists and people on the frontlines of climate change, be it in viticulture or anywhere else, hope must be supported by reality if it is to lead us to a safe and thriving living space.

The Wines of Alentejo have played an important leadership role in bringing best practices to London, a coalface of consumerism. This is the challenge of our time; once seen, it cannot be unseen and if you read this far, you are now part of the knowledge sharing network. Go forth…

The ‘Sustainability in Alentejo Wine Podcast Series’ will be released in June 2022.